Fotos by Ferg have been added – – – The North Baltimore High School Football team celebrated a Homecoming win for 2017, beating Cory – Rawson (1-4, 1-2) in a BVC game. The Tigers again got off to a good start, scoring on their first possession, with a quick drive through Hornet territory, as Brady Rader found Levi Gazarek wide open in the end zone for an 11 – yard TD pass (2 point PAT – Rader to Gazarek).

Cory would come back and score, with the 2 – point PAT to tied the game 8 – 8, just 2 and a half minutes into the game. But NB would quickly regain the lead, as they scored again, with Rader running in from 8 yards out (Gazarek PAT good), just another minute and a half later.

At the beginning of the 2nd quarter, Rader hit David Patterson for a 40 -yard TD pass (PAT good), to extend the lead to 22 – 8. But the Tigers had some issues on the next possession, with the Hornets managing to tackle Rader in the end zone, following a bad snap, for a safety (2 pts.).

C – R was not able to capitalize on the punt from the 20 – yard line. Then the Tigers decided to unleash their “secret weapon”, sophomore, Clayton Heineman, who raced away from everyone on the field, with a 78 TD run (PAT good). As the first half wound down, Rader would hit Kole Wymer on a TD pass and run play that covered 63 yards. NB had a commanding 36 – 10 lead at the half.

NB continued their domination in the 3rd quarter, as Rader hit Patterson on a 40 -yard TD pass (PAT good), with the defense shutting out Cory.

In the 4th Rader, hit Kole Wymer for a 70 – yard TD play. Heineman would get his final of just 4 carries, rushing for another 74 yard TD sprint (PAT good), finishing up the scoring and sealing the 57 – 17 league win.

The Tigers improve to 3-2 overall and 2-1 in the BVC. Next week NB hosts Van Buren. This will also be the NBHS Band Glow Show – always a treat!

The purpose of the event is to exercise coordination between the Eastern Air Defense Sector, Federal Aviation Administration and 180FW.

The purpose of the event is to exercise coordination between the Eastern Air Defense Sector, Federal Aviation Administration and 180FW.

Those living in and around the Toledo, Sandusky, and Hillsdale areas may hear and/or see fighter jets in close proximity to a Civil Air Patrol aircraft, which will be taking on the role of a Track of Interest (TOI). A TOI is an aircraft that has been identified as a potential threat.

Although scheduled for the morning, the exercise flights could be delayed or cancelled due to inclement weather.

Aerospace Control includes maintaining air sovereignty and air defense through the surveillance and control of airspace over Canada and the U.S. These types of exercises are conducted on a routine basis as part of North American Aerospace Defense Command’s Operation Noble Eagle, which was initiated after the terrorist attacks of Sept. 11, 2001.

COLUMBUS, OH (Sept. 21, 2017) — The Public Utilities Commission of Ohio (PUCO) is participating in Rail Safety Week, Sept. 24-30, 2017, and wants to remind Ohioans to practice safety around all rail grade crossings.

Every three hours, a person or vehicle is hit by a train in the United States. Many crashes at railroad crossings occur because motorists fail to stop at the crossing, drive around the gates or stop/stall on the tracks.

The PUCO is encouraging you to practice caution when traveling over rail crossings by following these seven steps for safety.

Every rail crossing in Ohio is required to post the U.S. Department of Transportation number associated with the crossing and the emergency contact number for the railroad. If your vehicle stalls or gets stuck on the tracks, get out immediately and move away from the tracks at a 45 degree angle towards any oncoming train. Once it is safe to do so, the emergency number, visibly located near the crossing on the light poles or cross bucks, should be the first number you call if your vehicle is stuck or if warning devices aren’t properly functioning. The railroad has the ability to stop the flow of train traffic heading towards the crossing. If it is an emergency, next call 9-1-1 or the local police.

With 36 freight railroads operating approximately 5,300 miles of track and over 5,700 public grade crossings, Ohio is the fifth leading state in terms of goods transported by rail. The PUCO, in conjunction with the Ohio Rail Development Commission, is responsible for ensuring the safety of motorists at highway-rail grade crossings in Ohio. PUCO rail inspectors inspect the warning devices that are essential for motorist safety.

Thanksgiving & Christmas Applications will be accepted from OCTOBER 2nd thru DECEMBER 1st………..

SEPTEMBER 21, 2017 (BOWLING GREEN OHIO) – The Salvation Army will be accepting applications for Thanksgiving and Christmas assistance from October 2nd to December 1st. Families can apply to receive a food basket for Thanksgiving and Christmas (limited assistance on a first come, first serve basis) as well as toys for children 14 years of age and younger. Applications for families living in Wood County will be taken Monday through Friday 9:00 am-11:30 am & 1:00 pm -3:00 pm at The Salvation Army office located at 1045 N. Main Street, Bowling Green Ohio. For those who live in North Baltimore, you can apply on November 10th at the North Baltimore Senior Center, 514 W. Water St. from 9:00am to 2:00pm.

Applicants must bring the following documentation:

Photo ID for all Adults in the Household

Proof of Household Income within the last 30 Days

The Salvation Army is also looking for local businesses, churches and organizations to participate in the Christmas Adopt-A-Family and Angel Tree programs as well as our Red Kettle Campaign. To learn more about The Salvation Army or these programs, please contact our office at (419) 352-5918.

About The Salvation Army in Northwest Ohio

The Salvation Army, founded internationally in 1865 and established locally in 1887, is an evangelical part of the universal Christian church.  It has been supporting those in need in His name without discrimination for 126 years in Northwest Ohio. Nearly 40,000 individuals throughout Northwest Ohio receive assistance from The Salvation Army each year through a broad array of social services that range from providing food for those who are hungry, relief for victims of disasters, assistance for those who are disabled, outreach to those who are elderly and ill, clothing and shelter to the those who are homeless, opportunities for children who are nderserved, and alcohol and drug counseling for those who are struggling with addictions. 88 cents of every dollar spent is used to carry out those services. For more information, go to www.salvationarmynwohio.org.

Week of Sept. 25, 2017 – The following is highway construction scheduled to occur within Hancock County.

Interstate 75 northbound just north of state Route 103, Bluffton, will have reduced-width lanes through the work zone for replacement of curb and guard rail. Two lanes of traffic will be maintained the majority of the time, but some intermittent lane closures will occur during daytime and nighttime hours. Work is being performed by Eagle Bridge, Sidney.

The following locations will be restricted to one lane through the work zone during installation of center line rumble stripes. Work will continue until mid-October. Work is being performed by Gerken Paving, Napoleon:

State Route 235 from the Hardin County line to county Road 304 will be reduced to one lane through the work zone for pavement repair and resurfacing. Work is being performed by Bluffton Paving, Bluffton.

State Route 12 just east of Benton Ridge closed July 17 for approximately 60 days for a bridge deck repair. The route is expected to reopen with the week. Traffic is detoured onto state Route 235, U.S. 224 and Interstate 75 back to state Route 12. Work is being performed by Global Outdoor Solutions, Cleveland. (see map)

U.S. 68 from the Findlay airport to Eagle Creek, south of Findlay, will have daily lane closures in both directions for installation of cable barrier in the median which began August 12. The cable has been installed. Seeding and mulching of grassed areas is underway. The project is expected to be completed in October. The project also includes the installation of overhead lighting and the removal of the caution flasher at Western Avenue. Work is being performed by Lake Erie Construction, Norwalk.

Step up your game this school year with these ideas for a better lunchbox………………….

(Family Features) Coming up with fresh ideas every day to keep kids’ lunches exciting is no small task. When the goal is an empty lunchbox and a full, happy tummy, the winning combination is a blend of nutrition and flavor.

Step up your game this school year with these ideas for a better lunchbox:

Get creative. Foods that look can good taste good, too. Transform sandwiches into fun shapes using cookie cutters or make tiny heart- or star-shaped, bite-size pieces of cheese for a fun finger food. Another fun idea: thread sliced and bite-sized vegetables on a wooden stick for a no-cook kabob. For a sweet variation, use fruit instead and sprinkle with coconut for extra flavor.

Skip the packaging. Little fingers can struggle to open pre-packaged foods, so instead opt for fresh ingredients that fit into a bento-style box. Not only can kids see what tasty treats await and dig straight into their meals, less packaging means less processing, which is good for their health and the environment.

Keep it simple. Opt for delicious, flavorful foods that deliver nutrients kids need and the taste they want without any extras. An option like Hidden Valley Simply Ranch makes for a rich and creamy complement to carrot sticks, cucumber and other lunchbox staples. With no artificial preservatives, flavors or colors this ranch is perfect for encouraging kids to eat the veggies you pack. Look for Classic Ranch or for a special twist, try flavors such as Cucumber Basil or Chili Lime.

Rely on the familiar. Refueling during the day is important to keep kids focused and able to mentally and physically tackle the rest of the school day. Avoid trying out new foods at lunchtime and save experimenting with new flavors for meals at home.

Go for variety. Representing multiple foods groups isn’t only a good way to deliver good nutrition, the variety in colors and textures can make the meal more interesting and encourage kids to eat more. Include savory meats, crunchy crackers, veggies and sweet fruits.

Add a treat. Whether it’s a favorite fruit or yogurt, a single piece of candy or even a simple note that says “I love you and I’m proud of you,” find a way to add something sweet to every lunch and bring a smile to your child’s daily routine. 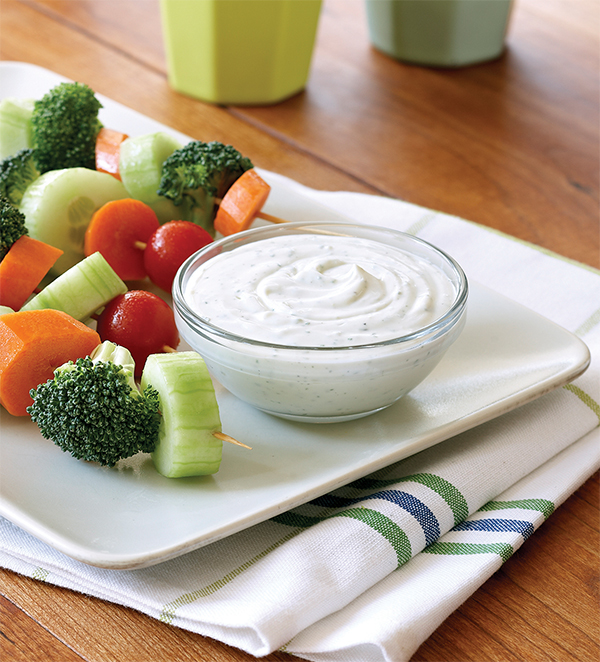 Tip: Add cheese cubes for protein on kabobs, if desired.