The North Baltimore Board of Education held their November meeting last Tuesday, November 28, 2017 at the NBHS/NBMS building. All Board members, minus Mrs. Cotterman were present.

There wasn’t much on the agenda so it was a very short meeting.

The Board accepted the resignation of Board Member Cheryl Cotterman who has faced some health issues the past several months. She did not run for re-election this fall. She will be replaced by Marcy Byrd, who won the seat in the November election. Sharninghouse and Archer were also re-elected to their seats for new terms. “We thank Mrs. Cotterman for all she has done for the District while serving on the Board,” said Superintendent Ryan Delaney.

Other comments from Superintendent Delaney include:
*”Great Job” by Emily Meyerson on the musical “Little Shop of Horrors” last weekend.
*WI-FI is being connected in the Fieldhouse
*50 tons of dirt have been applied to the Baseball Field (To assist with drainage)
*Because of the decrease in train traffic through the Village, there have not been issues with school delays (tardiness) lately.
*The 2018-2019 School Calendar was approved as presented. The first day of school next year is August 20. The last day is May 30. Christmas break is only one week.

Treasurer Steven Stewart added:
*CSX is officially scaling back. We expect to continue to receive some money, as they are obligated for 20 years through the TIFF agreement.
*The district is in need of a new bus. Mr. Stewart is searching for grant funding.
*The district received approximately $800 through a donation from someone’s estate. The money was divided between several school districts because the deceased person had no heirs.

There have been many exciting things happening here at Powell since the Board last met.

Our sixth graders had a very successful experience at Camp Storer in Jackson, Michigan.  Our students were active and engaged learners that represented our school well.  I had the pleasure of spending the majority of the day with them on the Tuesday, October 24th.  I think I had as much fun as they did!

I would like to thank Heidelberg University for coming on October 31st and providing our students with an assembly about Junie B. Jones – the ever popular storybook character.  The university’s drama club entertained our students with an exceptional performance that was very well received and at no cost to the district.  Their generosity was greatly appreciated!

Powell hosted another very successful book fair in conjunction with parent teacher conferences.  I would like to thank Sandy Stewart and the Powell PTA for assisting with the book fair operation.  Many hands made for light work.  Each teacher was allowed to select about $45 dollars in free merchandise for their classrooms and this number is based upon sales.  The book fair is a great experience for our students and benefits the school at the same time.

Conferences were very well attended.  For any parents not able to attend, I asked teachers to reach out via e-mail or phone in the days that followed.  Virtually every parent in the district received a personal update about their child’s performance.

The teachers at Powell did an excellent job planning the fall festival that was held the morning of November 2nd.  Students participated in games and various activities and received prizes.  The students seemed to greatly enjoy themselves!

On November 8th, I met with the rest of the district administrative staff in reviewing Powell’s emergency plan.  We had an excellent program put on by the county EMA director that included local police, fire, EMS, and related community support services.  Our crisis management plan was reviewed in great detail to ensure the preparedness of all stakeholders.

On Friday, November 10th, we hosted approximately 75 veterans to celebrate Veteran’s Day.  Vets were invited to enjoy a Salisbury steak dinner in the cafeteria and were served cookies made by Mrs. Carr.  There were plenty of decorations, thank you cards, and many other kind gestures to signify our appreciation for their sacrifices.  This might have been our best turnout yet!

Powell teachers donated $220 in support of the NB drama club on Wednesday, November 15th.  For a donation, staff members were allowed to dress down.  Thanks go to the teachers for their generosity and for supporting the arts within the district.

I took 28 students and 3 chaperones to SkyZone in Holland on November 20th.  The students selected were the top sellers in our recent fund-raiser event.  Their enthusiasm and support of the fund-raiser helped us greatly and will help provide nearly $6,500 in support of school activities and playground improvements!  Smaller awards were provided to participants who sold more than four items the following day.

Interim reports were sent home prior to Thanksgiving vacation.  We are over 1/3 of the way through the year.  Gosh!  How time flies when you are having fun!

Candid photographers were in the building today to take photos for the yearbook.  After several years of not having one, we re-introduced the yearbook last year and we sold approximately 50.  We are hoping to hit 75 this year.  I felt it was a great yearbook and a good value – certainly a yearbook we could be proud of.

You are invited to the K-3 Sing-a-long at Powell on December 11th.  It begins at 6:30, but plan to get there early if you want a seat.  The gym fills quickly!

The December meeting of the Board of Education will be held December 19 at 6:00pm. This is a week earlier than normal, due to the holidays.

The Weston Church of Christ will be hosting a FREE concert with “The Sound”. The Weston Church of Christ will be hosting a FREE concert with “The Sound”.

The Sound have traveled thousands of miles singing at churches, concert halls, fairs and camp meetings across the country.

They currently have over 1.6 million views on YouTube and have shared the platform with such artists as The Booth Brothers, Ernie Haase and Signature Sound, Jeff and Sherry Easter and more.

Their family blend, joy for the Lord, and heart for ministry are a welcome addition to any service or event. You may click on one of the promotional links to download a high-resolution, print ready concert poster for your event! “When God Shows Up” is Pastor Ralph Mineo’s sermon topic at St. Luke’s Lutheran Church in North Baltimore on Sunday, December 3 at 10:15 a.m.

The first candle of the Advent Wreath will be lit at the opening of worship to celebrate the First Sunday in Advent.

“When God Shows Up” is Pastor Ralph Mineo’s sermon topic at St. John’s Lutheran Church in McComb on Sunday, December 3 at 8:00 a.m.

The first candle of the Advent Wreath will be lit at the opening of worship to celebrate the First Sunday in Advent.

Sunday School begins at 9:15 a.m. The children’s Sunday School will be a rehearsal for the December 17th Christmas Musical “Signs of Christmas.”

A joint adult Sunday School is with the McComb United Methodist Church.

When planning the number of lights you will need for your tree, estimate using at least 100 lights for every foot of tree height…………….

(Family Features) Nothing captures the spirit of the holidays quite like the glow of bright, colorful lights. Few things, however, can put a damper on holiday decorating quite like seeing a section of those freshly hung lights go dark.

“It’s a shame when you go through the hassle to get your light sets and pre-lit decor, such as your pre-lit tree, wreath or lawn ornaments, out of storage only to find some sets only partially work or don’t work at all,” said John DeCosmo, CEO of Ulta-Lit Tree Company, the maker of the LightKeeper Pro, a tool that fixes light sets by illuminating working bulbs so the user can see the bad ones. “When light sets go out, it’s as if a bit of your Christmas spirit did, too. 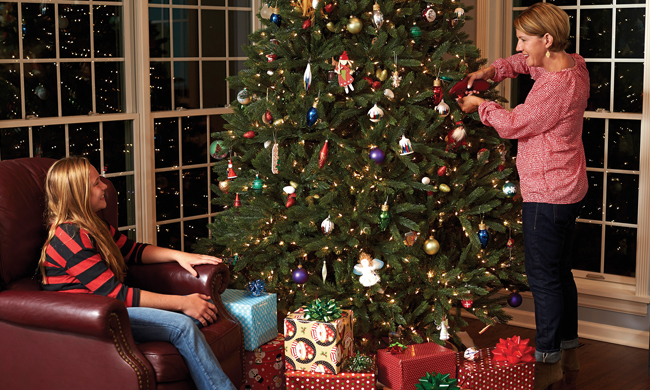 With these pro tips, you can keep your holiday lights bright and spirits merry:

Should your lights go dark this holiday season, the pros at Ulta-Lit are available to answer questions seven days a week between Thanksgiving and Christmas, and year-round, at 888-858-2548 or UltaLit.com.

The Ohio Department of Transportation (ODOT) District Two announces the following closure due to plumbing maintenance.

Interstate 75: Rest Area Plumbing Maintenance
Wood County: Effective Monday, December 4, from 6am to 7pm, the southbound I-75 rest area, between US 6 (Exit 179) and Cygnet Road (Exit 171), will be closed for plumbing maintenance. The parking lot will remain open.

Church of the Good Shepherd United Methodist will celebrate the First Sunday of Advent on December 3, with worship beginning at 10:15 a.m.  We will welcome guest preacher Becky Grohowski, who will share “”God?  He is Downright Awesome!” from Isaiah 64:1-9.  Sunday School for youth and adults begins at 9:15 a.m.  Sunday School for the children is held during worship, after the Children’s Moments.  We will also share in the lighting of our Advent Wreath – lighting the “Hope” candle this week.

Other activities at the church this week include choir practice each Wednesday evening at 7:00 p.m.

And remember the Christmas Tree Lighting and Caroling at 6:00 pm on Sunday, December 3, at The Bridge Fellowship tree on the corner of Tarr and Broadway streets.

The Bairdstown United Methodist Church will celebrate the First Sunday of Advent on December 3, with worship beginning at 9:15 a.m.  Guest preacher, Becky Grohowski, will share from Isaiah 643:1-9, “God?  He is Downright Awesome!”  Sunday School class is held immediately following worship.  Please plan to join us as you are able!