CEO and President of Blanchard Valley Health System (BVHS) Scott Malaney has been nominated and selected to receive the Ohio Hospital Association’s 2019 James R. Castle Distinguished Service Award. The award honors Malaney as an individual whose professional attainments embody qualities of an outstanding leader and mentor for service to the community.

Malaney will be presented with this award at the Ohio Hospital Association 2019 Annual Meeting & Education Summit on June 4 in Columbus, Ohio.

“On behalf of the more than 3,000 women and men of BVHS, I am very pleased to receive this Distinguished Service Award,” said Malaney. “I hold Jim Castle, for whom the award is named, and last year’s award winner, Phil Ennen, in such high regard. It is a terrific honor to have my name associated with theirs.”

Malaney has been the CEO and president of BVHS since October 2000. In his time at BVHS, Malaney has overseen the building of Donnell Patient Pavilion at Blanchard Valley Hospital, the development of Birchaven Retirement Village and more. Divisions of BVHS have earned numerous awards during his tenure, such as Blanchard Valley Hospital named a “100 Top Hospital” by IBM Watson six times and Birchaven Village named a “Best Nursing Home” by U.S. News & World Report four times.

For more information about Malaney and BVHS, visit bvhealthsystem.org. This check puts the fundraising effort “OVER THE TOP” to purchase the Aquarium for the Assisted Living wing. The total funds raised for the project were $5,000 from the many donations received from all around the area.

Watch video to see how to get organized! (Family Features) Getting organized and making the most of your home’s storage space can be a daunting task. 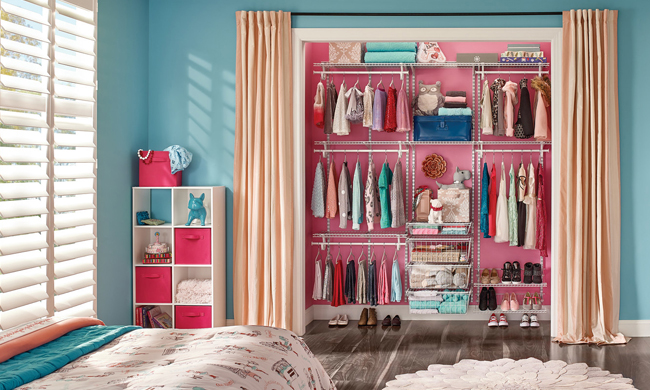 To help keep clutter at bay and streamline organization throughout the house, consider these tips for revamping your closets and designated storage areas from the experts at ClosetMaid.

Find closet systems and other organization hacks at ClosetMaid.com.

Watch video to see how to get organized!

Learn more about diabetes and how to manage nutritional needs through a free online course…. My dad was recently diagnosed with diabetes and was advised to change his diet. Do you know of any local resource to help us understand which diet changes he’ll need to make?

One of the best resources your dad can turn to is his doctor, who might be able to connect him with a dietitian who can possibly help him tailor an eating plan specific to his dietary needs.

Additionally, your dad and the rest of your family can learn more about diabetes and how to manage nutritional needs through a free online course created by Ohio State University Extension family and consumer sciences educators. OSU Extension is the outreach arm of The Ohio State University College of Food, Agricultural, and Environmental Sciences.

The course, Dining with Diabetes:Beyond the Kitchen, offers participants information about how to make healthy food choices when eating at restaurants, going grocery shopping, or planning weekly meals.

The course, available at go.osu.edu/DWDBtK, is self-paced and includes interactive presentations, fact sheets and resources, informational videos, and links to websites and apps that provide more information about managing diabetes. During the course, participants can share ideas, questions, and tips with one another, and they can speak directly with OSU Extension professionals.

Your dad also has the option to take part in an in-person Dining with Diabetes class. This four-class program is taught by OSU Extension family and consumer sciences educators and a certified diabetes educator.

The class offers the following:

Nutrition is a key component to managing diabetes. Both the online and in-person Dining with Diabetes courses are informative options to help those with diabetes and their families understand the role that healthy, well-balanced meals can play in managing this disease, said Shari Gallup, an OSU Extension educator and one of the instructors for the in-person class.

Studies show that serious complications can arise with diabetes, including cardiovascular disease, blindness, kidney failure, and nontraumatic lower extremity amputations, so it’s very important for those managing this disease to understand the role that nutrition plays in their health.

“Some of the people who have taken the class say that they now read the nutrition labels on the foods they buy and that they’ve increased their daily exercise,” Gallup said. “Others have reported that they are cooking with olive oil more and that they’ve seen their blood sugar levels decrease after using some of the tips and techniques they’ve learned in class.”

OSU Extension periodically offers the Dining with Diabetes class in 31 Ohio counties. To find the class closest to you, go to go.osu.edu/CxXV.

Editor’s note: The Dining with Diabetes classes are offered frequently in Wood County through the OSU Extension office. Call them at 419-354-9050 for more information

Revealing a lesser-known heart disorder and what to do about it…. (Family Features) A feeling of dread washed over Donnette Smith after she felt her chest jolt. “Please, God. Not here, not now,” she thought. In the middle of her church choir performance, her heart started racing uncontrollably.

High off the ground, she fought off feeling faint while perched in the middle of the third row of bleachers. “There’s no way down,” she thought. “I can’t ask the whole row to get off because there are thousands of people out there listening.” Maintaining her wits, she signaled for a stagehand to grab a ladder so she could crawl off the back as the lights dimmed. Once on solid ground, her family rushed her to the hospital.

This was just one of many rapid heartbeat episodes Smith has experienced. She has a lesser-known, but common, heart disorder called paroxysmal supraventricular tachycardia (PSVT). Nearly two million Americans live with this alarming arrhythmia that can spike heart rate unexpectantly and suddenly from a normal 60-80 beats per minute (bpm) to more than 250. In addition to the trademark rapid pulse that can last from minutes to hours, symptoms may include dizziness, fainting, sweating, chest pain or pressure, or being out of breath.

“For a time, it truly dominated my life,” Smith said. “I lived in constant fear that I would faint from having an episode while driving my grandchildren. I put off travel and stayed close to home. I didn’t want to be in a strange city and go to a new hospital and explain my condition. Some episodes would happen at 2 a.m. and my husband, my rock, would drive me to the hospital. Of course, that throws off both our next days, leaving us walking around like sleep-deprived zombies.”

The suddenness of PSVT makes it difficult to diagnose. Doctors need to “catch” an episode, or see the unusual heartbeat, on an electrocardiogram (ECG or EKG) or Holter monitor before they can make a definitive diagnosis. With PSVT episodes being sporadic, occurring randomly and sometimes mere minutes in length, this can be hard. On average, diagnosis can take three years or longer and may be fraught with misdiagnoses.

For Smith, it was nearly 10 years before she had answers. PSVT’s symptoms may masquerade as anxiety or panic attacks. Smith was first prescribed an anti-anxiety medication. While seeking out a diagnosis, patients like her are often left thinking it may be all in their heads and wondering if they’re going crazy. They understandably struggle with how to convey this seemingly invisible illness to friends, family, coworkers and their doctors.

“The uncertainty of living with PSVT is equally challenging, if not more so, than the physical symptoms,” said Dr. Kathryn Wood, associate professor at Nell Hodgson Woodruff School of Nursing Emory University, who has published research on the emotional toll of PSVT, on women in particular, in the “European Journal of Cardiovascular Nursing.” “It looms over you, affecting self-esteem and causing you to avoid daily activities such as driving, work and time with family and friends.”

Thanks to lessons from her own journey, Smith has devoted her life to empowering those living with PSVT, and those living with other heart conditions, to live fully and unafraid. She serves as the president of Mended Hearts, a national nonprofit organization that provides peer-to-peer support for heart disease patients, their families and caregivers. Smith’s advice for outsmarting PSVT hinges on three key actions.

1. Educate Yourself. If you have or suspect you have PSVT, OutsmartPSVT.com is the only online educational website designed to help actively manage the condition. It debunks myths, addresses frequently asked questions and provides useful tips.

2. Speak Up for Yourself. Track your symptoms to inform talks with your doctor. The PSVTPlace.com website is an online patient registry that can help. Increasingly, wearable watches and technology are entering the market that may be able to capture an abnormal heart rhythm to show your doctor. Persist in getting an accurate diagnosis. It may be that you need to seek out a hospital or cardiac treatment center with cardiologists on staff who have experience treating people with PSVT. Be vocal in seeking referrals or second opinions.

3. Call on Your Support System. Whether it be an advocacy group, support group or friends and family, rely on those close to you. Communicate openly about your condition, including what signs to be on the lookout for and how they can best help you. On multiple occasions, Smith’s coworkers were there for her when she had episodes at work. They were armed with her medication history and current treatment plan to have conversations with doctors on her behalf.

“The difference is night and day when you resolve to take control of your health,” Smith said.

What Smith has learned about PSVT has also helped her family members. Her daughter, Dana, began experiencing symptoms of PSVT at age 16. Having overcome PSVT first-hand, Smith was able to offer advice to her daughter, who was accurately and quickly diagnosed – a rarity for those living with PSVT. Dana underwent an ablation at 19 years old, a surgical procedure that works by scarring or destroying tissue in your heart that triggers an abnormal heart rhythm. Dana has not had an episode since. Smith’s treatment path was less direct – her first ablation was unsuccessful, but watching her daughter no longer dread the next episode after having a successful procedure gave her courage to undergo a second ablation, which worked.

There is currently no at-home treatment for PSVT, although there is a growing collection of resources, basic techniques and support groups that can help people manage the condition.

“If the resources we have now were around when I was first experiencing symptoms, I could have saved years of living in uncertainty,” Smith said. “I hope to motivate others to never give up in seeking the support they need to get a swift, accurate diagnosis. Having PSVT doesn’t need to define you. There’s hope.”