Are you ready for some football?

CFO and NFF team up to highlight the changes designed to protect players and increase safety.

IRVING, Texas (Aug. 20, 2015) – With training camps in full swing, the month of August provides the perfect time for the National Football Foundation (NFF) & College Hall of Fame to highlight the key rule changes that will take effect during the 2015 season.

Since 2011, the NFF has partnered with Rogers Redding, the national coordinator of College Football Officiating (CFO), to help generate awareness for the rule changes in college football through a series of regular columns distributed by the NFF. The CFO functions as the national professional organization for all football officials who work games at the collegiate level, and the organization held its annual winter meeting of conference coordinators for football officials in late January for the third consecutive year at the NFF headquarters in Irving, Texas.

Having officiated football for more than three decades, Redding started his career working high school football in Texas. He later officiated in the Southwest Conference from 1988-93, served as a referee in the Southeastern Conference for nearly a decade and worked three national championship games. He received his bachelor’s degree from Georgia Tech and later obtained a masters and Ph. D. in physical chemistry from Vanderbilt. Redding was honored with the NFF’s Outstanding Football Official Award in 2010.

Here are the 2015 major rule changes as summarized by Rogers Redding:

Crew of Eight Officials: For about thirty years the rules have allowed as many as seven officials on the field. Based on an approved experiment by the Big 12 Conference, the rules now allow for eight officials. The eighth official, the center judge (with the letter “C” on the uniform), is positioned in the offensive backfield opposite the referee.

Non-Standard Overbuilt Facemasks Are Illegal: This is a facemask characterized by greater weight and closer spacing between the bars. Use of the facemask is a safety issue as opponents can easily get their fingers caught in the tight space. The NFL outlawed this facemask a few years ago.

Illegal Equipment: Player is Out for One Play: Up until now, if the officials noticed that a player was wearing illegal equipment, the team was charged one of its three timeouts. The new rule is that the player must leave the game for at least one play and may not return until the equipment is made legal. His team may burn a timeout to keep him from missing a down, but the equipment must be corrected before he is allowed to play.

Pregame Warm-Ups: Teams Guaranteed Access to the Field: By the new rule, the teams are now guaranteed that they may remain on the field for pregame warm-ups until at least 22 minutes before the opening kickoff. The committee was concerned that teams were being forced to leave the field early because of other pregame activities, and thus were having to spend too much time in the locker room before the kickoff. The new rule may be suspended for a given game by prior mutual agreement of the teams.

Resetting the Play Clock When the Ball is Not Ready for Play: When the play clock begins its count from 40 seconds, on rare occasions the officials will have difficulty getting a new ball from the sidelines. In such a case after some period of time, the referee will stop the game clock and signal for the play clock to be reset to 25 seconds. In previous years, this was done after 20 seconds had elapsed. This has been changed to 15 seconds, to prevent too much time from running off the clock. This happens very seldom, but there must be a rule to deal with it.

Helmet off Defensive Player: Play Clock Set to 40 Seconds: When a player’s helmet comes off, the game clock is stopped, and the player must leave the game for one play. In past years, the play clock has been set to 25 seconds. Last year, however, there were a few situations near the end of a half where this happened with more than 25 seconds on the game clock; this forces the offense to have to snap the ball one more time when they were trying to run out the clock. So now the play clock is set to 40 seconds when a defensive player loses his helmet, and still to 25 seconds when it is a player on offense. This is also consistent with the rule for stopping the game due to an injured player.

Pushing or Pulling an Opponent off the Pile: Unsportsmanlike Conduct: Player safety continues to be a major emphasis of the rules committee. This new rule addresses player action at the end of a fumble play, for example, when several players are scuffling for the ball in a pile. Starting in 2015, if a player forcibly pulls or pushes an opponent off the pile, he is to be charged with unsportsmanlike conduct. Here’s why this is important: if a player is flagged for unsportsmanlike conduct twice in the game, he is automatically disqualified after the second offense. The committee believes this will be a major deterrent to this kind of action, which can lead to more trouble and potential injury.

Sideline Warning Returns: An important point of emphasis for the rules committee and the officials is keeping the sidelines clean. This means that players and coaches are not allowed in the restricted area—the space between the sidelines and the coaches’ box and team area. For a long time, the first infraction led to a sideline warning, with no yardage penalty. After a few years the rule was changed to assess a five-yard penalty for the first offense. Now, we are returning to the warning for the first infraction. No yardage penalty will result until the second offense.

Instant Replay: Blocking During an On-Side Kick May Be Reviewed: One of the important rules about kickoffs is that the kicking team is not allowed to touch the ball until it has gone ten yards, unless a receiver touches the ball first. After it has gone ten yards, either team may get the ball. A rule that is not so well known is that the kicking team may not block until they are eligible to touch the ball. The instant replay official (IRO) has always been able to review whether the kick is touched. Starting in 2015, the IRO may also review whether the kicking team blocks before being eligible to touch the ball; if they do, it is a foul. The rules committee feels that because of the enormous potential for the kicking team to get possession of the ball as the result of blocking too early, the IRO should be able to review this play and possibly “create a foul” from the replay booth. 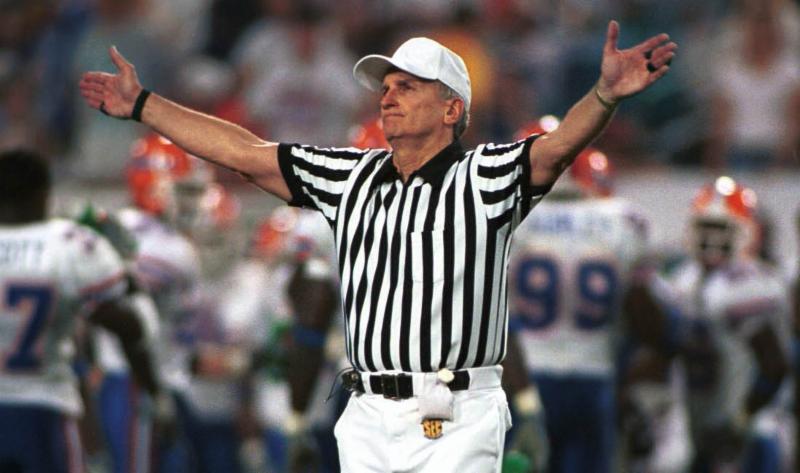 About the National Football Foundation & College Hall of Fame
Founded in 1947 with early leadership from General Douglas MacArthur, legendary Army coach Earl “Red” Blaik and immortal journalist Grantland Rice, The National Football Foundation & College Hall of Fame is a non-profit educational organization that runs programs designed to use the power of amateur football in developing scholarship, citizenship and athletic achievement in young people. With 120 chapters and 12,000 members nationwide, NFF programs include the College Football Hall of Fame in Atlanta, the NFF Leadership Hall of Fame, the NFF Scholar-Athlete Awards presented by Fidelity Investments, the NFF High School Showcases, the NFF Hampshire Honor Society, the NFF Faculty Salutes presented by Fidelity Investments, the NFF National Scholar-Athlete Alumni Association, and scholarships of more than $1.3 million for college and high school scholar-athletes. The NFF also collaborates with the Football Writers Association of America (FWAA) to release the FWAA-NFF Super 16 Poll; awards the William V. Campbell Trophy presented by Fidelity Investments and prominently showcased at its official home inside the New York Athletic Club; and bestows several other major awards at the NFF Annual Awards Dinner. NFF corporate partners include the Chick-fil-A Peach Bowl, Fidelity Investments, Herff Jones, the Pasadena Tournament of Roses, the Sports Business Journal and Under Armour. Learn more at www.footballfoundation.org.

PrevPreviousReturning American Warrior Riders at NB Legion
NextChowline: Plan Ahead to Save Money at the Grocery StoreNext